Procter Machine Guarding has added three new videos to its gallery that clearly demonstrate the strength of the Satech modular perimeter guards and doors that the company supplies and installs. 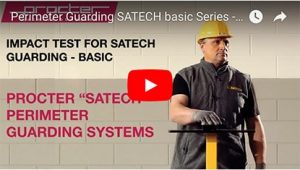 The first video shows a short length of Satech Basic series guarding being subjected to impact testing, with a load of 100kg being swung so as to strike just above the middle of a panel that is supported on either side by posts and a pair of further panels. The panels and posts are seen to deflect then spring back almost to their starting positions, with the impact energy being absorbed by deformation of the mesh panels, support posts and steel mounting brackets. There is no damage to the floor fixings so, in a real-world situation, it would be simple and quick to replace the damaged components with new ones.

A second video shows a Satech Strong series panel being subjected to the same impact test, with the energy absorbed in a similar way and the floor fixings remaining undamaged. In these two videos, there is a useful graphical overlay showing the relevant dimensions including the height of the impact, the length of the wire on which the load is swung, and the mass of the load (100kg). In addition, the speed at impact (just over 20km/h) and the resultant energy (in excess of 1600J) are shown, so viewers can be in no doubt as to the strength of the guards.

In the third video, a Satech door is subjected to a 1150J impact test. This impact is just above the centre of the door, with the door supported just by its own frame and no further panels to the sides. Although it is not shown in the video, the door can still be opened once the lock had been released, and the floor fixings points can be reused when replacing the damaged door and frame.

One of the advantages of the cost-effective Satech modular perimeter machine guarding system is that it is offered in different specifications to suit various types of application, so customers only pay for what they need. Approximately 70 per cent of Satech applications are suitable for the Basic series, with virtually all of the remaining 30 per cent being better served by the Strong series – for applications such as robot cells. Of course, no modular system can ever be optimum for every application, so in some circumstances, customers specify Satech Green Fast or MDF series, Procter’s own Angel modular machine guarding system, or fully bespoke guarding designed and manufactured by Procter. There are also projects for which the majority or the guarding can be implemented using standard modular components, with bespoke guarding used for awkward areas or, for example, where solid panels are required to provide greater protection.

The Satech modular panels are complemented by an extensive range of Satech doors in a broad choice of heights and widths. Single- and double-leaf swing doors are available, as well as single- and double-leaf sliding doors that are either suspended or guided by a floor-mounted track. For applications requiring a wide opening but with space on one side only, there is a sliding telescopic door; if a very large opening is required (up to 3000mm wide) a double telescopic door can be specified. All of the door options are compatible with the Satech Basic and Strong series of modular perimeter guards.

To watch all the videos of the Satech guarding products being impact tested.  Alternatively, see more information about Satech modular perimeter guarding, or use the online chat facility, telephone or email [email protected] with specific enquiries.