Is a Drill Guard Really Necessary?

Jeremy Procter, a Member of BSI’s MCE/3 committee, former Convenor of the European Standards Committee responsible for Machine Guards (CEN TC114 WG11), and Managing Director of Procter Machine Guarding, uses recent HSE reports of accidents and prosecutions to show how important it is for drilling machines to be equipped with guards.

A series of prosecutions have demonstrated the real risks associated with unguarded drills.  In 2013 three companies were prosecuted by the HSE (Health and Safety Executive) and fined by magistrates after workers had been injured by unguarded drills.  These injuries were a severed finger, a broken neck, serious cuts, burns and a fingertip that needed to be amputated. 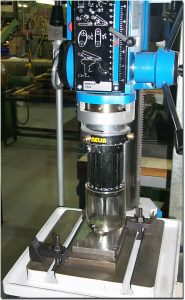 According to the HSE, an unguarded drill is an ‘accident waiting to happen’ – yet it is easy to retrofit guards such as this Nelsa Safetispeed drill guards.

In the first of these incidents, a manufacturer of marquees was fined £10,000 and ordered to pay costs of £4,076 after a fabricator welder suffered a severed finger while using a pedestal drill.  The 52-year-old had been drilling holes in sections of aluminium when his glove become entangled in the unguarded drill.  He was unable to reach the stop button and, as he pulled his hand away from the drill, he severed the ring finger on his right hand.  Had the drill been suitably guarded with a chuck guard, the accident could have been avoided.

Furthermore, the operative should not have been wearing welding gloves; the company’s own risk assessment made it clear that wearing certain types of the glove while operating drills posed a danger because of the risk of entanglement.

Speaking after the court hearing, HSE inspector Edward Walker said “Incidents involving entanglement on rotating tools like drills are fairly common, but they are all easily avoided if manufacturers … follow their own risk assessments and provide suitable guarding.

“Such guarding is readily available and inexpensive, so there is no excuse for failing to take action – and to take action before someone is injured.”

In the second accident, which occurred at a steel fabricating company, a 39-year-old suffered three fractures of the neck, as well as serious cuts and burns on his forearm, after his sleeve became entangled and he was dragged into the rotating spindle of a twin pillar drill he was using.  The worker was pinned to the bed of the machine and unable to reach the stop button; he shouted for help and was eventually freed by a colleague.  After spending seven weeks in hospital he had ten weeks of physiotherapy and wore a neck brace for six months, but one side of his body has been left weakened by his injuries.

A prosecution brought by the HSE resulted in the company being fined £13,000 and ordered to pay costs of £7,871.

Marie-Louise Riley-Roberts, an HSE inspector, said:”The custom and practice of the company was to rely on experience rather than on the need for guarding with the addition of supervision and further instruction and training as necessary.  These failings had existed for a considerable amount of time until the practice of using unguarded machines became normal working practice for the employees.  The result was that this was an accident waiting to happen and the employee suffered serious injuries.

“This accident could have been prevented by the simple measure of providing guarding to prevent access to the rotating parts.”

Although the third accident was not as serious, it still left the worker with the tip of one finger having to be amputated.  In this case, the company where the accident occurred was fined £12,000 and ordered to pay costs of £2,433.

This accident involved a 62-year-old worker who was using a magnetic drill with a rotary broach attachment to drill holes in steel plate.  To protect himself from cutting fluid and hot swarf, the worker was wearing gloves.  As he attempted to add lubricant, his gloved hand became entangled in the unguarded drill.

Speaking after the hearing, HSE Inspector Rob Hassell said:”The incident was an entirely preventable one.  Magnetic drills come supplied with guards, which are obviously there for a reason and should be used.  The issue of gloves and drilling machines is one that is well known – rigger-type gloves don’t tear easily and should not be worn during fixed drilling work.

“Last year, about 13% of major injuries reported involved contact with moving machinery.  Companies must ensure equipment is effectively guarded and their workers are suitably protected from dangerous moving parts.”

In all three of the cases outlined above, the companies were guilty of breaching the Provision and Use of Work Equipment Regulations 1998 (PUWER 98).  Regulation 11(1) states that 1) Every employer shall ensure that measures are taken in accordance with paragraph 2) which are effective (a) to prevent access to any dangerous part of machinery or to any rotating stock-bar; or (b) to stop the movement of any dangerous part of machinery or rotating stock-bar before any part of a person enters a danger zone.

From the three cases above it can be seen that an unguarded drill is ‘an accident waiting to happen’, regardless of the skill or experience of the operative.  Should an accident occur, the HSE is likely to pursue a prosecution that could result in a substantial fine and costs having to be paid.  Furthermore, although company names have not been used in the above outlines, the HSE publishes details of its prosecutions, which can harm the company’s reputation.  There can also be other financial costs associated with an accident and subsequent investigation, such as downtime, lost production, overtime to cover for an injured worker, and the cost of managerial time.  Today, with the HSE operating a Fee for Intervention (FFI) cost recovery scheme, companies are being invoiced an average of approximately £500 for inspections, investigations and enforcement action.  Such costs make drill guards look a very attractive investment.

If you use drills for production or maintenance it is important to check whether they are adequately guarded.  For manually operated bench or pillar drills, telescopic guards are often a simple and cost-effective way of preventing access to the dangerous parts.  When the drill is not operating, the guards provide good access to the chuck, drill bit and workpiece.  Note that most accidents with drilling machines occur at the drill tip when it is in its uppermost position and the operator is removing the workpiece or securing the next; guarding of the drill (in addition to the chuck and spindle) can therefore provide a high standard of protection without obstructing the view of the workpiece or otherwise interfering with production.  Where practicable, guards should be used in preference to trip devices, as trip devices merely reduce the severity of an injury and do not prevent entanglement with the rotating parts of the drilling machine.

Procter Machine Guarding manufactures the Nelsa range of standard guards for machine shop tools including drills, milling machines and lathes.  These guards are all designed to be simple and quick to retrofit to existing machines and are therefore a very cost-effective way of safeguarding machinery, complying with PUWER and, most importantly, preventing many of the accidents that typically occur on these types of machine.  Nelsa Safetispeed drill guards are characterised by a smooth telescopic action, a patented spiral guide groove that prevents jamming by swarf, a unique sprung ball catch that allows quick and easy access to the chuck, as well as providing complete operator protection and a clear view of the workpiece.