Jeremy Procter, a Member of BSI’s MCE/3 committee, Convenor of the European Standards Committee responsible for Machine Guards (CEN TC114 WG11), and Managing Director of Procter Machine Guarding, look at BS EN 953:1997 +A1:2009 and compares it with its predecessor.

With the forthcoming introduction of the new Machinery Directive at the end of 2009, standards committees have been busy reviewing standards and updating them to refer to the new Directive. In most cases, the standard has simply been amended with a new Annex ZB that refers to the essential requirements of the new Machinery Directive 2006/42/EC. However, the new Directive introduces specific references to guarding such that substantive changes have been required in BS EN 953:1997 +A1:2009 Safety of machinery. Guards. General requirements for the design and construction of fixed and movable guards. 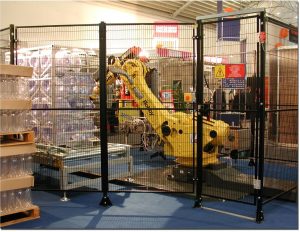 Because of the changes to other standards in recent years, it has also been necessary to update references to those standards in BS EN 953. For example, the previous version of BS EN 953 referred to EN 292-1 and EN 292-2, while the amended standard refers to EN ISO 12100-1 and EN ISO 12100-2 (Safety of machinery – Basic concepts, general principles for design, of which Part 1 is Basic terminology, methodology and Part 2 is Technical principles). Updated standards references appear in clause 2, Normative references, the Bibliography (previously known as Annex C) and in other clauses as required.

Clause 3, Definitions, has seen a number of changes, largely to bring BS EN 953 into line with EN ISO 12100-1 Safety of machinery – Basic concepts, general principles for design. Basic terminology, methodology. An interesting point to note here is that a guard is defined in the standards as a “physical barrier, designed as part of a machine, to provide protection.” In contrast, item 1.1.1. (f) of the Essential Health and Safety Requirements in the new Machinery Directive defines a guard as “a part of the machinery used specifically to provide protection by means of a physical barrier.” This raises the question as to whether other parts of the machine – such as weather-proof covers and chutes – are deemed to be ‘guards’ and therefore need to be fixed using retained fasteners (see below), as they are not designed ‘specifically’ to be a protective barrier.

For all practical purposes, machine designers should use the definition of a guard given in BS EN 953:1997 +A1:2009. Indeed, the standard provides additional clarification within the definition of a guard as follows: “Note 2. Depending on its design, a guard may be called eg casing, shield, cover, screen, door, enclosing guard.” Interpreting the term ‘specifically’ from the Directive in order to relax the requirements relating to these parts of the machine would be incorrect, as they often do provide protection, if only as a secondary function.

One of the most significant changes to the standard is in sub-clause 7.2, Retained fastenings. Previously the standard stated “Where practicable guard fastenings shall remain attached to the guard, as this reduces the likelihood of their being lost and not replaced” – which is sensible, as the phrase “where practicable” permits designers to take into account the cost, time and trouble associated with fitting retained fasteners when considering the reduction in risk that would be achieved. However, BS EN 953:1997 +A1:2009 states: “Where it is foreseen (eg maintenance) that the fixed guard will be removed then the fastenings shall remain attached to the guard or to the machinery.” This is far more prescriptive and brings the standard into line with the essential requirements of the new Machinery Directive. It is likely that this sub-clause will increase the cost of manufacturing guards, plus it will introduce additional costs and delays in the event of a fastener becoming damaged during maintenance of the machinery. Several different types of retained (or captive) fastener are available, but there is a balance to be struck between purchase cost, installation cost (including the need for tighter tolerances with some fasteners) and the risk of fasteners becoming damaged during the machine’s lifetime. And if a damaged fastener is removed, will it be replaced with an identical fastener, a conventional screw, or will the fastener not be replaced at all?

Of course, if it is not foreseen that a guard will be removed for maintenance, cleaning or other reasons, then there is no requirement for retained fasteners to be used. Furthermore, if an assessment using EN ISO 13857:2008 Safety of machinery – Safety distances to prevent hazard zones being reached by upper and lower limbs indicates that, say, removing a roof panel will not provide access to hazardous parts of the machinery, then there is no need to use retained fasteners on that panel (unless there are other hazards, such as ejected parts or hazardous substances).

Procter Machine Guarding is the UK’s leading machinery guarding specialist, with extensive experience in the design, manufacture and installation of close-fitting machine guards and perimeter guards. With unrivalled knowledge of the applicable standards, as well as a deep understanding of the ergonomic issues relating to machine guarding, Procter can design guards that meet all the necessary safety standards, do not hinder production, and enhance the machine’s aesthetics.

To request more information about machine guarding, email [email protected] or telephone us.