ALARP – As low as Reasonably Practicable

Explaining the meaning of risks being ‘as low as reasonably practicable’

Jeremy Procter, Convenor of the European Standards Committee responsible for Machine Guards, and Managing Director of Procter Machine Safety explains what is meant by risks being reduced ‘as low as reasonably practicable’ in the context of machinery safety.

On 14 June 2007, the European Court of Justice (ECJ) upheld one of the key elements of British health and safety law, namely the use of the phrase ‘so far as is reasonably practicable.’ This was despite the European Commission’s claim that using ‘so far as is reasonably practicable’ did not implement the Framework Directive (89/391/EEC) on EU employers’ duties to protect the health and safety of their workers, as the Directive has no such qualification. The ECJ dismissed the European Commission’s case and ordered it to pay the UK Government’s costs. 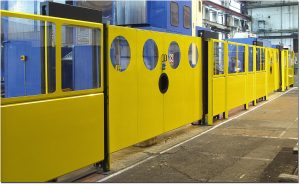 Explaining the meaning of risks being ‘as low as reasonably practicable’

The phrase ‘so far as is reasonably practicable’ is contained in section 2(1) of the Health and Safety at Work etc Act 1974 (HSWA): ‘it shall be the duty of every employer to ensure ‘so far as is reasonably practicable’ (SFAIRP) the health, safety and welfare at work of all his employees’ – though the phrase has existed in English law for considerably longer. Furthermore, rather than it being used as a legal loophole, the phrase has been interpreted in the courts such that it has helped employers in Britain to achieve and maintain an excellent safety record. Speaking after the EJC delivered its verdict, Bill Callaghan, then Chair of the Health and Safety Commission (HSC), stated: “Quite clearly we have been effective in protecting people, as currently, we have the best occupational safety record in Europe.”

‘As low as reasonably practicable’ (ALARP) essentially means the same as ‘so far as is reasonably practicable,’ with the essence being that risk must be weighed against the money, time and trouble needed to control it, though the decision is always weighted in favour of health and safety. While the phrase is advantageous inasmuch as it provides flexibility, it can also have its drawbacks if, for example, a duty holder and an enforcement authority disagree on what is reasonably practicable. The HSE (Health and Safety Executive) says that in the majority of cases it decides by referring to ‘good practice’, which has been established by discussions with stakeholders to reach a consensus about what is ALARP. However, in complex or new situations, or those where hazards are high, additional formal techniques can be used – including cost-benefit analysis (CBA).

What all this means is that if no further steps are to be taken to reduce risk, the duty holder – who could be a machine specifier, machine designer or person responsible for machinery in the workplace – must be able to produce evidence to show that the money, time or trouble required would be grossly disproportionate to the risk reduction achieved. In general, the approach should be that the duty holder adopts the measures offering the highest standard of safety except where they involve grossly disproportionate sacrifices.

Decisions about whether a particular control measure should be implemented can be made more difficult by factors such as the ongoing costs of maintenance, the difficulty and expense associated with ensuring employees wear PPE (personal protective equipment), and the low likelihood of unusual events occurring. In addition, technological developments mean that the ‘state of the art’ evolves over time, so what might have been prohibitively expensive or difficult to implement in the past may now be ‘reasonably practicable.’ Bear in mind also that the HSE’s guidance to its own staff states: ‘We believe it is right that the greater the risk: the higher the proportion [ie the ratio of sacrifice to benefits] may be before being considered ‘gross’. But the disproportion must always be gross.’ Nevertheless, it often remains the case that a judgement has to be made; there is no simple formula for determining what is ALARP.

Other considerations include the fact that common practice in an industry may not be viewed as good practice by the enforcement authorities, and the relative impracticality of retrofitting risk-reduction measures on existing plant may mean that the level of risk that is considered to be ALARP may be different to the level that is considered ALARP for new plant.

Here in the UK, the majority of prosecutions brought by the HSE in relation to machinery safety are for breaches of the HSWA, and cases often involve arguments relating to whether employers have taken ‘reasonably practicable’ measures to reduce risk. However, the HSE has also led prosecutions under the Supply of Machinery (Safety) Regulations 1992 (sometimes known as SMSR), which is the UK legislation implementing the Machinery Directive. No doubt when the new Machinery Directive (2006/42/EC) comes into force on 29 December 2009 the HSE will not hesitate, where appropriate, to bring prosecutions to court under The Machinery Regulations 2008. Because of the significant changes contained in the new Directive and Regulations, it is imperative that companies building machines or partly-assembled machines, as well as those performing final assembly or importing machinery for use in the European Economic Area, start preparing now.

Procter Machine Guarding has published a free Guide to the New Machinery Directive, which is available as a PDF from the Procter Free Guide Downloads – or request a copy by emailing [email protected]